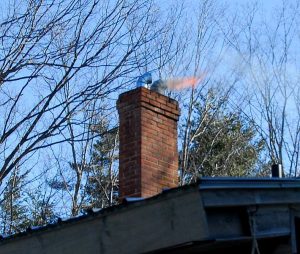 According to a Chimney Safety Institute of America article, it’s important to know what causes fires, the signs of fires, and how to prevent them.

Signs of a Chimney Fire

Chimney fires are often unmistakable – noisy, powerful, explosive. Flames and intense smoke can shoot up to the top of the chimney. You may hear a low rumbling sound like a train or low-flying plane. These types of fires can be seen by neighbors or a car that happens to drive by as the flames grow. If you’re living in the house, hopefully you’ll notice sooner by being aware of the warning signs, including:

However, there are other low-burning types of chimney fires that don’t get enough air or fuel to be so noisy and visible. These types of fires often go undetected. You might not even know about it until you have your chimney inspected much later. But these less dramatic fires still reach very high temperatures and you will likely find severe damage to the structure of the chimney and combustible parts of your house.

Regular chimney inspections can identify damage from undetected fires, including these signs.

If you hire A Sweep Across the Bay to provide an inspection and our technician finds that a fire has occurred, we will get your chimney working safely again. We’ll also provide more regarding the facts about chimney fires to help you prevent further issues.

Fireplaces and wood stoves are wonderful for their warmth but their fires also produce smoke, water vapor, gasses, unburned wood particles, hydrocarbon, tar fog and minerals. These substances flow up into the chimney and condensation occurs, resulting in a black or brown residue called creosote that sticks to the inner walls of the chimney.

Creosote can appear crusty and flaky, but sometimes tar-like, drippy and sticky, or shiny and hardened. It is highly combustible. The danger occurs when creosote builds up and is exposed to high internal flue temperatures which can ignite a chimney fire. This is why a good chimney sweep is so necessary.

Air supply gets restricted by closing the glass doors, failing to open the damper wide enough, and the lack of enough air to move heated smoke up the chimney. A wood stove’s air supply can be too restricted if the stove damper or air inlets are closed down too soon or too often.

Burning unseasoned wood uses more energy at first just to drive off the water trapped in the cells of the logs and keeps the smoke cooler than if you were to use seasoned wood.

A chimney fire in a masonry chimney can melt mortar, crack tiles, cause liners to collapse and damage the outer masonry material. When that happens, it allows the flames to reach the combustible wood frame.

Although the chimneys must be able to withstand flue temperatures up to 2100°F, chimney fires still occur and can cause damage.

While built to handle hot fires, a wood stove’s connector pipes to the chimney can warp, buckle and even separate from the vibrations created by air turbulence during a fire.

If you have a chimney and worry about its potential to cause a fire, the best way to avoid damage is to know the facts about chimney fires. Then have our experts at A Sweep Across the Bay in Tampa Bay regularly inspect and clean your chimney. Contact us today and let us know how we can help you keep warm, cozy and safe.